High resolution but polygon saving model was made for use in difficult architectural visualisations and animations or movies and do not increase dramaticaly total polygon count in complete scene. It has xpresso in c4d format, that is ONLY animated, on door and steering wheel, handled by sliders. Wheels are revolving automatically according to speed and movement direction. Suspension is keeping wheels always on track. Just align to spline, define terrain and have fun! Environment scene where the car is placed is not included! About 90% polygons are quads. At format *.3ds and *.max all geometry is triangular. Jointed or rigged model means hierarchy of parents and children objects. OBJ file is not jointed and contains only default grey material without any other properties.

Opel is introducing its third body type to the 2009 Insignia line-up, a wagon. Known as the Opel Insignia Sports Tourer, this wagon is an important car for Opel considering the popularity of wagons in Europe. It is a large family car engineered and produced by the German car manufacturer Opel.

The Opel Insignia is an electric car, which was first introduced at the British International Motor Show in London. The Insignia was the first production car to be based on the Epsilon II platform, which was also used on other models such as the 2010 Saab 9-5 and the Chevrolet Malibu. While this will be considered a large family car in Europe, it would be considered a mid-sized wagon in the U.S.

It is composed of fully detailed and textured interiors. Both headlight and taillight are opened and the door can be opened. Moreover, the model includes modeled tires. The Insignia will comes with an exceptionally broad range of seven engines. All meet Euro 5 emissions standards and come with either manual or automatic six-speed transmissions. The previews are rendered in Softimage that increases the model’s versatility and rendering Quality. So you can achieve the best in your design.

We care about you that’s why we are providing you this 3D model of Opel Insignia 2009 in various formats. So, check out the formats provided also in the specifications. However, if you have any questions the object then feel free to contact us at (310) 697-3740. 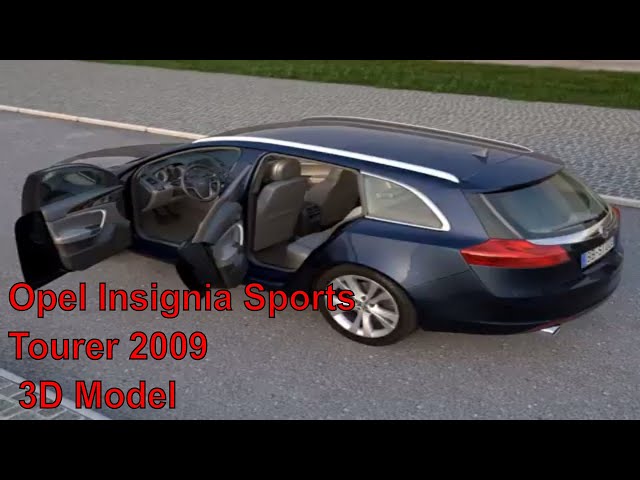